In this post we’re going be looking at social media marketing for salons, if you’re new to it and you don’t know where to start.

If you’re at the beginning of your journey, and you’re a bit nervous and confused by using social for your business, and you want to know where to start, here’s a few tips about how you can dip your toes in the social media waters.

The first tip which is one of the most important things you can do, and which makes life a little easier when starting out.

Pick A Platform That Suits You.

Start small and grow later. The mistake I see most people falter over when they’re starting social media campaigns is to overwhelm themselves.

They start a Facebook account, then Twitter, then Instagram, and, as video is all the rage, they also start a YouTube channel. All of a sudden they’ve got all these different audiences spread across multiple platforms and find they’re having to create content for all of them, different shaped posts, different types of content for each channel, and it becomes overwhelming and takes over everything, almost becoming a full-time job.

So just for you own well being and stress levels, it’s better to start small and grow big later, once you have a system down,rather than to fail with the overwhelm and pressure of having to produce all of this content.

The platform that you choose is entirely up to you, but, I think there are two things you need to consider here. One, it should suit your audience, obviously. The other is that it needs to suit you as you are more likely to stick with it.

If you’re talking to consumers for example, LinkedIn is probably not going be the best channel to work best with, and vice versa, if you’re trying to do business to business in Facebook, I’m not saying it’s not doable, I just think it’s just going to be a lot harder.

So if you’re more confident on Facebook than you are on Instagram, I would start on Facebook. Once you’ve made the decision to pick a platform, concentrate on that initially and perfect your system on that platform before moving to a new one.

Research How To Use That Platform Effectively.

want to become a social media expert on your chosen platform? Simply watch videos, read blog posts and consume content from people who are experts – select maybe one about the platform itself, and then pick one about strategy and then another about content creation. Just get to know how you’re going to create your strongest campaigns possible on that platform.

At this point, it’s about discovery and making yourself comfortable with the process. However, don’t fall into the trap so many others do and overthink things. This is called analysis paralysis and it’s the phenomenon of not taking action before knowing everything about the subject. Just pick a couple of tips from those people and then apply it yourself, don’t be afraid to put content of your own out there, as that is the way you’re truly going to learn.

Don’t Over-Post And Overwhelm Yourself Or Your Audience

Again, another tendency people have is the need to be posting, to all their channels, eight times a day, and they overwhelm themselves and their audience.

Look at what’s being successful for you, do more of that and do less of what isn’t doing that well. A quick way of figuring out how much your audience wants to hear from you and how frequently you should be posting is to look at your competitors.

If you go and look at your competitor’s pages and they’re posting six times a week, for example, but that’s getting, one to two likes, barely any engagement at all on their posts, then that would tell me that they over-posting, not under-posting. If you’re not getting the engagement, you could be over-posting, or your content is not that good.

If however your competition is posting once a week and they’re getting proportionately, let’s say a 5% engagement, So 5% of their total audience is engaging with every post they do, that’s really good – also take note of the type of content they’re posting, as that is an important factor.

With social media, you want to be looking around a 1-2% engagement rate, so of your total audience, around 1-2% of them should be engaging with you on a regular basis, that is good.

Don’t fall into the trap that you should be getting the same level of engagement that a major influencer would get, that is just not going to happen, at least at the very beginning, but that is not to say that if you get proficient at posting effectively with your audience in mind, that you can’t get that level of engagement, because you can.

Next thing you need to do is

Be Smart And Plan Your Salon Social Media Strategy.

There’s absolutely no point in posting if you haven’t got a strategy in place, because otherwise what you’re going be doing is posting at random, without any reason.

You could be posting random stuff at random times and your audience isn’t going to relate to that. So make sure you sit down at the beginning of the month, look at a calendar and say, okay, what content am I gonna post? Where am I gonna post it? What time of day am I going to do it? map it out.

Once you’ve got that plan, you don’t actually need to make the content at that point, it’s much easier for you to develop it and also get the results you’re looking for. Just remember to schedule time to create the content you planned, though if you have a plan, it makes it much easier.

On that note, next point,

You need to make sure that you’re analyzing what you’re doing and adapt your strategy going forward. So do your first month’s worth of content. Give it a try, if it’s not successful don’t be disheartened, it takes a while to figure out exactly who you are on social media and who your audience is, and what they’re going to relate to. If your funnier posts are doing well, then do more of those. If your funny posts are tanking, do fewer of those types of posts and try something else out.

You have to listen to what your audience is telling you, not literally, but through their engagement, that is why looking at your stats is really important. Analyse your results, make sure you’re measuring exactly how your page is performing, adapt your strategy and go forth and win on social media.

i hope that helped you out and given you a couple of simple ways to start your social media campaigns.

Once you start doing it regularly, it becomes second nature and get faster and even enjoyable.

Let me know how you get on.

Other Posts To Read You may be thinking about opening an aesthetic clinic, or you may already have one. In either case, it’s important to create a marketing plan 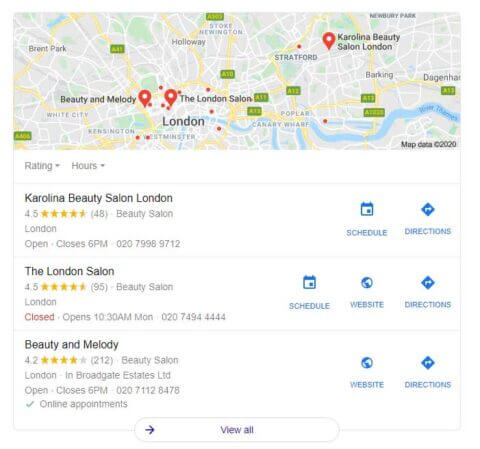 local SEO – How Important Is It For Your Salon? When it comes to finding the perfect hair salon, clients have a lot of wants and needs and as a salon owner, you might be